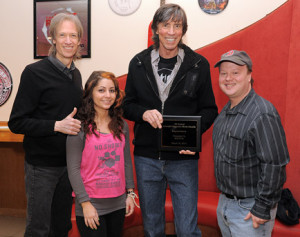 Last month bandmates Gary Pihl, Tommy DeCarlo and David Victor performed at the Kidz b Kidz 5th anniversary party in Boston. Supporting Kidz b Kidz benefits those dedicated to enhancing the lives of children who are in the hospital, and those determined to find cures for them. Proceeds from the sale of Kidz b Kidz products (all made with artwork created by kids!) are donated to hospitals nationwide. For more information, visit kidzbkidz.org

All of the band members are busy with their own projects. They all had a great time playing live last summer and are looking forward to going out again next year, monster gong and all. Check back on bandboston.com for further updates.

Thanks to everyone in the Monterey area for another sold out show! They say even more food was raised this year. Here’re a couple of pictures: The guys on stage and afterwards with a food bank volunteer. And for those of you on the east coast, they’ll be at the Levoy Theater in Millville, NJ on December 7th, 2012.

“What the critics are saying”

Boston still has what it takes to rock And best of all, it didn’t sound overly familiar. It didn’t sound tired. It didn’t sound done. Rather, songs as recognizable as “Peace of Mind” and “More Than a Feeling” seemed fresh, energized and even surprising … ON MILWAUKEE

The main event, BOSTON, lived up to their top of the bill standing. They once again proved why they are the most underrated live act that I have seen. Studio recordings of Boston music are great enough in their own right, but seeing them in a live setting, really makes one appreciate what they are witnessing. The sheer musicianship that comes together during their many extended instrumental pieces should make any real music fan bow in Wayne’s World fashion saying “We’re not worthy! We’re not worthy!” … Chad Hobbs, Columbus EXAMINER

Guitarist and founding member Tom Scholz is still on the top of his game, and vocalist Tommy DeCarlo sounds so similar to deceased vocalist Brad Delp one can’t help but imagine it is Delp’s voice itself roaring through the speakers … THE ORANGE LEADER

Just saw them in Grand Prairie. My goodness I can’t even describe how incredible they were. Best concert I have ever seen … LAYNA GRAY HARVEY

Tom is the Man! And BOSTON is the most feel good band there ever was! Lyrics, Music, Performances, etc. Rock on!!! … DUSTIN R. AUCKLAND

What a great concert you put on last night. Will not soon forget it!! Thanks for the good memories made past and present … DIANA SIMMONS RICHARD

Boston at its best. All the favorites, virtually indistinguishable from the recordings. Mr Scholz is a master musician/composer/arranger/technician. He has managed to collect a group of musicians (some from the old days, some from the not so old days) who recreated his musical vision incredibly well. It is one thing to make music like that in the studio, with all the benefits of digital recording. It is another to see and hear it reproduced live. As a musician myself, I was astounded to see the performance of so many pieces so well executed. As a fan, I had a ball listening to those old classic songs … TICKETMASTER REVIEWIER

Boston was awesome!!! This band knows how to put on a show. The addition of David Victor to the band did them justice. Tommy DeCarlo pays tribute to the late Brad Delp with his own flare! …TICKETMASTER REVIEWER

Baseball caps off to Tommy DeCarlo, the current lead singer for the band for filling the big cleats of Bradley Delp who unfortunately took his own life in 2007. Having never seen the band live I was skeptical at what the vocals would sound like. Delp had a unique voice and style that contributed to the bands iconic sound. DeCarlo hit it out of the park as far as I am concerned and hit every note and captured the spirit of Delp on each song. … BSD MUSIC & ENTERTAINMENT BLOG

Tom Scholz, founder of the rock band BOSTON, was honored for his philanthropy work by the annual Animal Rights National Conference this evening in Los Angeles. He was presented with the Celebrity Animal Advocate of the Year Award in recognition of his long-term support of animal rights. Scholz was accompanied by his wife Kim. Past recipients of this award include Alicia Silverstone, James Cromwell, Linda Blair, Charlotte Ross, Casey Kasem, Wendi Malick, Bill Maher and Dennis Kucinich.

In his remarks, Tom Scholz paid tribute to his friend and collaborator of 35 years, the late Brad Delp. Over the years, Scholz and Delp, also a longtime vegetarian and animal rights advocate, supported similar causes through their contributions they made to Scholz’s DTS Charitable Foundation. Scholz dedicated the award to Delp, who supported his work through the DTS Charitable Foundation to help protect all life from needless suffering. He explained that Brad Delp was a principal contributor to the foundation, which has helped many organizations like FARM USA. “His commitment to ethical vegetarianism over thirty years ago was a major factor in my emerging awareness of the unnecessary cruelty to animals in our society,” Scholz said.

Nearly a thousand animal rights activists from throughout the U.S. and eight other countries rallied in at the Westin Los Angeles Airport Hotel in Los Angeles, CA on July 19-23 to review progress and to map national strategy for the coming year. Highlights included special sessions to defeat the Animal Enterprise Terrorism Act and reduce global warming, as well as eyewitness accounts of confrontational campaigns to save seals and whales. The annual Animal Rights 2007 National Conference featured more than 100 speakers representing 60 organizations from every sector of the animal protection movement. The Headliners included Elizabeth Kucinich, John Feldmann of the band Goldfinger, Tom Scholz of the rock band BOSTON, Paul Watson who confronted Japanese whalers, and Marianne Thieme elected to the Dutch parliament on an animal rights platform.